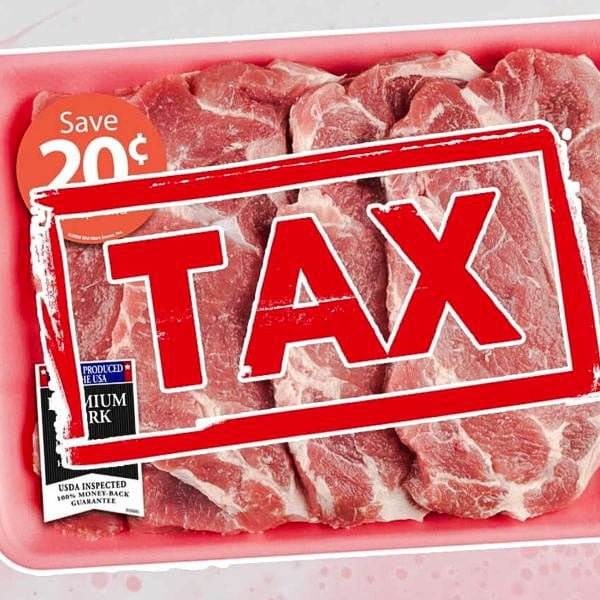 PETA and the Intergovernmental Science-Policy Platform on Biodiversity and Ecosystem Services both say, as do many others, that meat should be taxed in the same way that cigarettes, alcohol and gasoline (petrol) is currently taxed. It would be a “sin” tax to help pay for the damage that meat consumption does to health, the environment and to animals.

The coronavirus pandemic has resulted in a renewed call to tax meat because contact between wildlife, livestock, pathogens and people has increased which contributes to the possibility of another pandemic occurring causing more human death and more vast economic loss.

About human health: the Academy of Nutrition and Diabetics, argue that vegans are less likely to develop cancer, diabetes and heart disease than meat-eaters. They’re less likely to become obese.

The production of meat is a major cause of climate change, in part because of the methane produced by cows and the destruction of the Amazon rainforest, for example, to make way for pastureland and soya plantations. Soya is one of the primary ingredients of livestock feed.

Revenue from this tax could help go towards combating climate change, cleanup polluted areas as a result of agriculture, assist farms to transition away from animal-based farming and encourage people to transition to a more healthy diet.

PETA reports that the World Health Organisation classifies processed meat as a group 1 carcinogen. This places it in the same category as asbestos and cigarettes. A vegan diet could save US$40 billion in environmental damage and $250 billion in savings in health-care expenses according to a study by the University of Oxford carried out in 2016.

If everybody in the US transition to a vegan diet the projected total savings in the US would be US$289.1 billion as at 2050 according to a chart on the PETA website.

Another argument for a meat tax is that it would be more fair because at the moment all taxpayers pick up the tab to combat climate change and pay taxes to support healthcare programs whereas a tax on meat would target people who support the meat industry and therefore they indirectly cause the problems mentioned above.

Tackling meat production is a very effective way of dealing with climate change. For example, a University of Chicago study concluded that going vegan would be 50% more effective in fighting climate change compared to switching universally to hybrid cars.

In addition to methane produced by cows, the animal industry is described as a leading source of carbon dioxide and nitrous oxide. All three gases are top contributors to global warming and are described as greenhouse gases.

We mustn’t forget the animals, the livestock who are abused so badly in order to feed humankind. PETA tells us that turkeys, chickens, pigs and cows are routinely “mutilated without any painkillers and confined to filthy cages, sheds, or feedlots for their entire lives”.

Fish at fish farms also suffer living, according to PETA, in “filthy pens in which parasites run rampant”. And of course there are the slaughterhouses i.e. abattoirs, in which under halal rules the throats of millions of animals are routinely cut so they bleed to death although they are still conscious at the time. And millions of animals are scalded to death in tank of hot water annually. Sir James Paul McCartney CH MBE says that if abattoirs had transparent walls we’d all be vegans.

Tags:Amazonanimal lawdeforestationlawmeatrainforestvegan
previousCustomers don’t care if wood from the Amazon is illegal or legal
nextFish in rivers and the sea poisoned by cigarettes

In the video below I am feeding foxes with food laced with a homeopathic treatment. It genuinely works. Please try it. I love foxes because they are persecuted. They should not be persecuted. How did they deserve it? Click this link to read about curing fox mange.