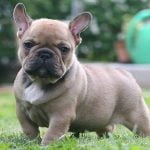 A genetic mutation has been discovered which contributes to bulldog breathlessness. It is not just about the shape of the head due to extreme breeding (shortened muzzle and flat face like the Persian cat) causing breathing issues. This gene is also involved.

Half of English and French bulldogs and pugs have breathing problems. Consequently this companion animal is regarded by animal advocates as an example of irresponsible breeding.

Scientists have discovered a mutated gene which is linked to fluid retention and airway tissue swelling. Knowing this should assist dog breeders to selectively breed this gene out of breeding lines thereby improving the quality of life of these pets.

It is difficult for breeders to justify breeding dogs with inherent health issues. There is a moral dimension which needs to be addressed as well. This research may help in addressing this moral issue.

The problem with the process of breeding out these genetic mutation is that about 80 percent of English bulldogs have it. That means 20% are free of it and to create a new line of bulldogs free of these gene risks making the animal even more inbred (narrow gene pool which can lead to health issues – inbreeding depression).

French bulldogs are in a better way healthwise because only 20% carry the faulty gene. Both breeds remain popular despite this health problem. Almost 37,000 French bulldogs are registered with the Kennel Club at December 2018. There has been a steady increase.

They are popular with celebrities such as Leonardo DiCaprio, Hugh Jackman, Reece Witherspoon and Dwayne Johnson (who I think has dogs partly because they ease his melancholy).

The research was carried out by scientists at the Roslin Institute at the University of Edinburgh. They analysed the DNA from 400 Norwich terriers who also suffer from these breathing problems but don’t have flat faces.

They have labelled the defective gene: ADAMTS3.

Jeffrey Schoenebeck of the Rolin Institute.

It is time that dog and cat breeders focused more on health and less on appearance at the expense of health.