NEWS-VIEWS: It is reported that there has been a 65% increase in stolen dogs during the coronavirus pandemic lockdown compared to the same period last year. The report comes from the charity Doglost. And to compound the problem, it appears that some adopters of dogs are being charged four times as much as normal with the price in the thousands of pounds. It really is Rip off Britain. 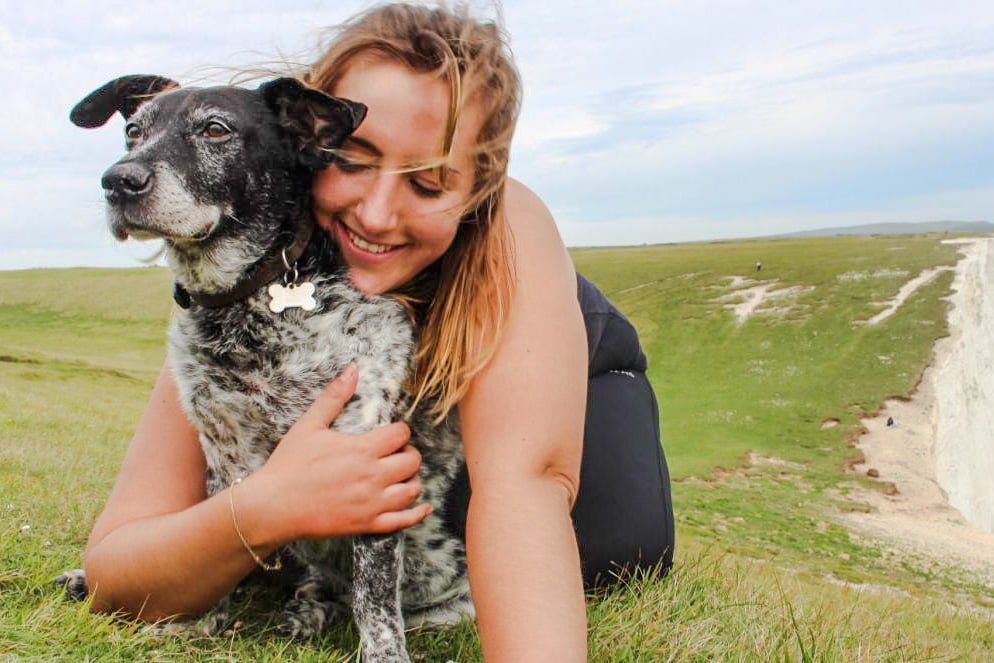 Spillo a lost dog with his owner Laura Bierer-Nielsen. Photo: The owner via the Times (believed).

I have to say that this increase in thefts does not surprise me. It is inline with a general increase in criminality in Britain particularly using the Internet. Cybercrime is massively on the increase in my opinion and you don’t have to go far to find somebody who has suffered from persistent attempts at cybercrime. Telephone scams, email phishing and any other method that international fraudsters use to winkle money out of gullible people particularly retirees, is being used. The police appear to be bamboozled and paralysed.

You may have heard of him, his name is Colin Butcher and he runs a pet detective agency called the Pet Detectives. He is a former police officer. He confirms that he is receiving three times as many requests to track down lost pets, some of whom are stolen. Around 40 dogs were stolen in Cambridgeshire, Suffolk and Norfolk in the months of June and July of this year.

Mr Butcher says that most dog thefts are driven by demand. In other words, they are being requested to steal a particular dog breed to order which is my understanding of that assessment. It includes the theft of pregnant dogs so that the thieves can then sell the puppies. He receives about 16 calls a week for missing animals normally, which has increased to 40 currently.

It looks as if there is a link between the theft of dogs and their increased prices. There is certainly a link in one way in that thieves steal a puppy or adult dog and then offer the dog back to the owner demanding a reward. I believe this is called a “buyback”.

Mr Butcher claims that the thieves know which police forces in the UK are particularly poor at dealing with pets theft. This allows them to operate in those areas with almost complete impunity. They steal with zero risk. It is money for old rope and rich pickings. Mr Butcher says that he is able on occasions to establish a theft has taken place and then gets the police involved to assist him for a few hours on the recovery of the cat or dog.

In one instance, Mr Butcher was able to track down the theft of a springer spaniel in St Mary Cray in the southeast of London to an illegal dog breeder, John Lowe. Mr Butcher’s team carried out covert surveillance of his facility and handed the evidence to the police.

Mr Butcher wants every dog owner to be the “eyes and ears” of his detective agency. People should be alert to the possibility that a dog has been stolen and that someone is involved in illegal dog breeding.

In another story, a family is staying in a holiday cottage just outside Midhurst in West Sussex until they find their last dog. They had planned on a one-week holiday but have vowed to stay there until their 15-year-old dog is found. Spillo went Missing on July 28. Ms Bierer-Nielsen put up 400 posters without luck and then contacted Mr Butcher’s agency. She believes that a crime has taken place (stolen or hit by a car) and also believes that somebody knows something which can help her to find her beloved “old plodder” of a dog.

Be alert to the possibility of pet theft. I would say that pedigree purebred cats which can look very glamorous should be kept indoors at all times. If a person adopts a fancy pedigree cat they should take on board this possibility. It puts more responsibility on a cat owner if they have to keep their cat indoors because they have to entertain their cat artificially to stimulate them and to allow them to express the natural desires and therefore be happier.