↓
Home→Dogs→Plaster cast of a dog at Pompeii 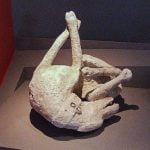 This is a picture of a plaster cast of a dog at Pompeii. It is the right time to show it on this website. In A.D. 79, on this day, Mount Vesuvius erupted and destroyed Pompeii and Herculaneum. It was one of the deadliest in the history of Europe. The mountain spewed out a deadly cloud of superheated tephra (rock fragments and particles) and gases to 33 kilometres in the air. It ejected molten rock and pulverised pomice and hot ash. Every second 1.5 million tonnes of it was thrown from the mountain. The amount of thermal energy released was 100,000 times more than the combined Hiroshima and Nagasaki A-bombings which ended the Second World War. 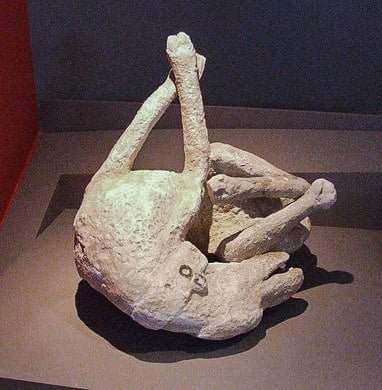 Traditionally, August 24-25 were said to be the days when the eruption took place. A more modern hypothesis has concluded that it happened in October or November of 79 A.D.

The reason why the people and the animals we now see are made of plaster of Paris is because the excavations of the human remains resulted in voids being created in the compacted ash. Plaster of Paris was carefully poured into the spaces to reveal the final positions and the faces of the last residents of Pompeii.

The picture shows a dog in a contorted position wearing a collar. The collar is very thick and the dog appears to have died a very difficult and painful death. It is believed that the dog was chained and could not escape. The open mouth shows teeth. The dog was gasping for breath.