Unprecedented phenomenon: thousands of racing pigeons have not returned home

In a race from Peterborough to the north-east of England, it has been estimated that 40% of the 9,000 pigeons taking part have failed to return. Ian Evans, chief executive of the Royal Pigeon Racing Association (RPRA) said that they quickly knew something unusual had happened: “I’m 45 and have kept pigeons since I was 9 years of age and I have never heard of anything like this. It was extremely unusual and is a real mystery.”

Pigeons and seagulls on the South Bank in London opposite Parliament. Photo: Negative Spaces on Pexel.

He believes that something disrupted the pigeons’ navigational abilities. It may be something to do with the solar wind activity which can distort the Earth’s magnetic field. It is believed that pigeons use the Earth’s magnetic field to navigate. However, the Met Office said that there was nothing unusual in the weather. Nicola Maxey said that there had been some low-level geomagnetic activity but they were regular occurrences and nothing strange or extreme had occurred.

The matter was being investigated to find a plausible explanation. They are not sure how many birds have been lost. But it may be between 5,000 and 10,000. One participant, Richard Sayers, based in Skinningrove, North Yorkshire said: “We’ve seen one the very worst ever racing days in our history. Around 3,000 birds are missing from this village alone and thousands across the North-East.”

Pigeon fanciers are asking people who come across a racing pigeon in their garden to feed and water them and to allow them to rest before they continue their journey home. You can identify a racing pigeon because they have an identification ring with a code and number. Mr Sayers said that people owe a debt of gratitude to racing pigeons because they helped us in major conflicts and save thousands of lives by carrying messages.

The RSPCA said that people should not feed the pigeons with bread but birdseed or crushed cornflakes and provide water. They say that food should be removed after 48 hours or when they start to fly.

SOME MORE ON PIGEONS:

Bifold doors can harm birds when they fly into them

I have bifold doors leading to my garden. I sit in bed in my living room (yes!) working on my ...
Read More
When pigeons feel heavier they are more confident

I've used the word "confident" in the title. I need to be a bit more precise in describing what happens ...
Read More
People unnecessarily disturb a couple of courting pigeons

Today, as usual, I went up to the corner shop at about 6:30 in the morning to buy my newspaper ...
Read More
Driver avoids speeding fine because flying pigeon obscures his face 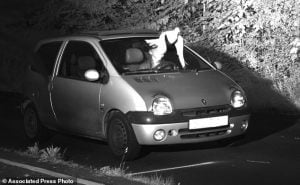 Never criticise the humble pigeon again, please. The pigeon is considered a pest by many. I see them as having ...
Read More
Tags:animal navigationbirdsnewspigeons
previousStolen dog dumped and reunited with owner after 10 years of breeding
nextThe saying “treated worse than an animal” reveals humankind’s deplorable relationship with animals

36 pence for a dead baby octopus, one of the most amazing creatures to ever swim the seas

The words in the title are those of Justin Webb, 41, on Twitter. He is a charity worker and vegan ...
Read More

When I saw this photograph I thought of another similar situation. It concerns a Netflix documentary called My Octopus Teacher, ...
Read More

In a highly unusual video captured by Lance Karlson, a geologist, the viewing public can see the angriest octopus attacking ...
Read More

We know that octopuses are highly intelligent creatures and to that knowledge we can add a new discovery, namely that ...
Read More

A study led by Eduardo Sampaio, a researcher at the Marine and Environmental Sciences Centre in Lisbon, discovered that octopuses ...
Read More