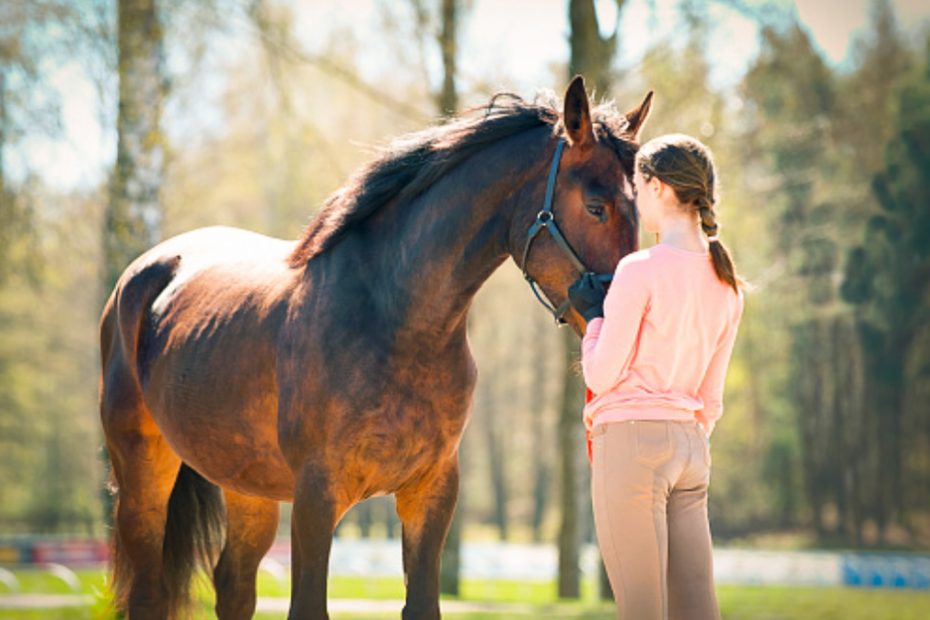 Domestic animal caregivers should talk to their animal companions politely in melodious and pleasant tones as they know when you’re angry and when you are expressing that anger in your voice. As a result, they become upset according to a study of horses and pigs. Observant cat owners and scientists who have run studies know that dogs and cats can read emotion in a human voice. They can tell the difference between negative and positive tones in the sound of the voice. In this instance, scientists wanted to find out if horses and pigs responded in the same way. 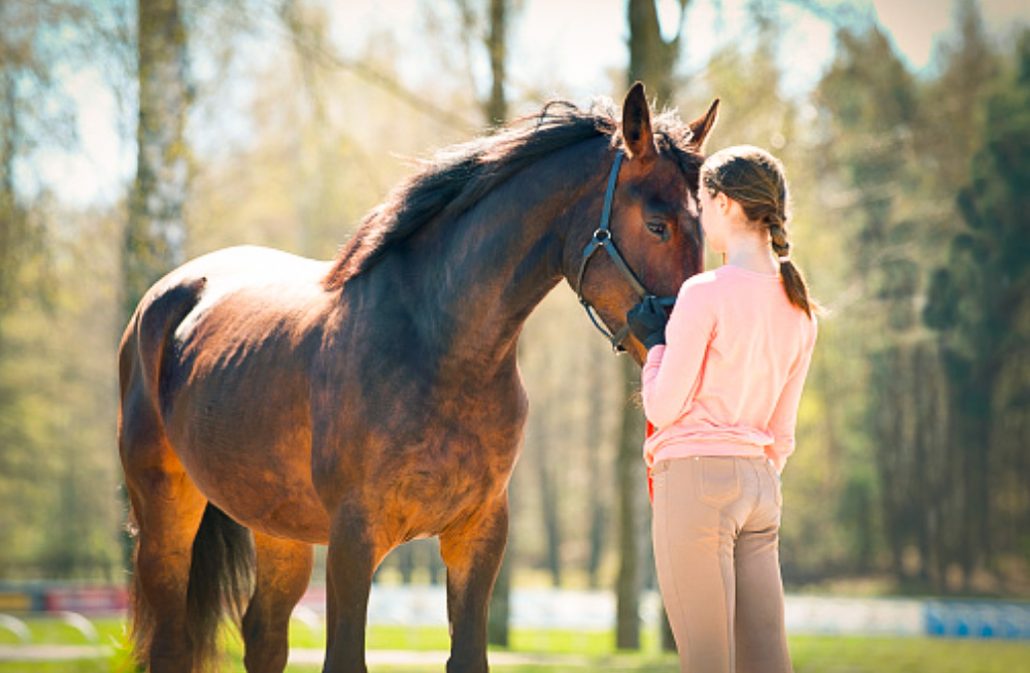 Talking to your horse in melodious tones is the right way. Image: iStock (modified).

And you can guess the outcome, otherwise I wouldn’t be writing about it! It seems that the phrase “horse whisperer” is very apt because if you whisper and speak gently to a horse you can obtain far more positive results.

In the study they assessed how horses responded to angry and joyful sounds from animals of their own species, made by their wild or domestic cousins and by humans.

The sounds were played to the animals through loudspeakers. They were meaningless sounds in terms of the spoken word created by actors with the intention of communicating either a positive or negative tone or, indeed, anger.

They recorded the positive animal noises while the horses were feeding, playing and socialising. The negative sounds were recorded during periods of isolation.

Elodie Briefer, a behavioural biologist at the University of Copenhagen said: “Our results show that these animals are affected by the emotions we charge our voices with when we speak to or are around them. They react more strongly – generally faster – when they are met with a negatively charged voice, compared with having a positively charged voice played to them first. In certain situations, they even seem to mirror the emotion to which they are exposed.”

They assessed how they responded in terms of whether they stopped eating, flatten their ears, moved around or stood still, moved their tails or tilted their head to the side.

The study is published in the journal BMC Biology. In conclusion they stated in the report: “Domestic horses, Przewalki horses and pigs seem to discriminate between positive and negative vocalisations produced not only by [members of their own species], but also by [members of other species], including humans.”

Further they stated that: “Our results suggest that the valence [positivity or negativity in tone] of human voice can have an impact on the emotional states of domestic and captive animals.”

The effects on individual animal were less pronounced in wild boars when communicated to buy humans compared to sounds from their own or related species. Briefer thought that further research was required to investigate the extent to which animals have an emotional life and whether they can be self-conscious.

This is a long-standing discussion; whether animals are self-aware or self-conscious. In my view they are not but I am open to correction. They studied the wild animals in parks or zoos where they were of course captive but undomesticated.

The study with horses must impact the quality of cat caregiving. I can remember about 14 years ago watching a video on YouTube of a man yelling at his Maine Coon cats in an effort to create an amusing video. It was objectionable. I believe the video is still on YouTube. There is nothing amusing about that kind of treatment.

The study will not educate observant and careful cat care givers because they already know that their cat responds positively to a melodious and friendly voice and fearfully when the voice sounds angry and aggressive.

Below are some more pages on horses. 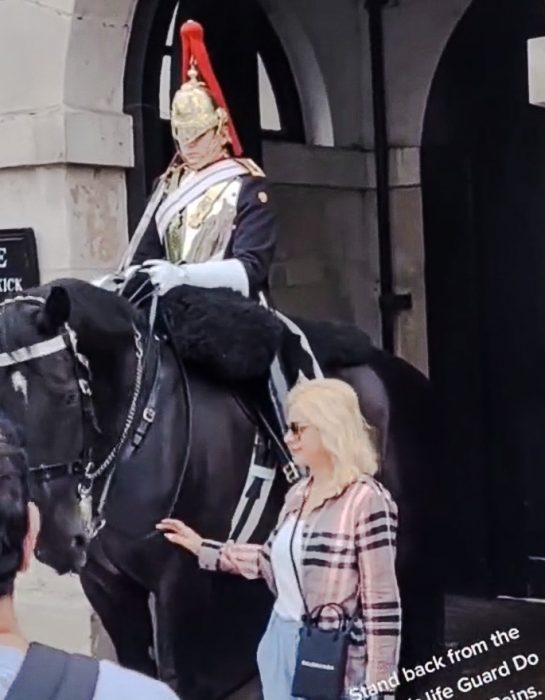 UK: A tourist touches the reins of a Queen's Guard horse and is almost immediately screamed at by the soldier: ...
Read More 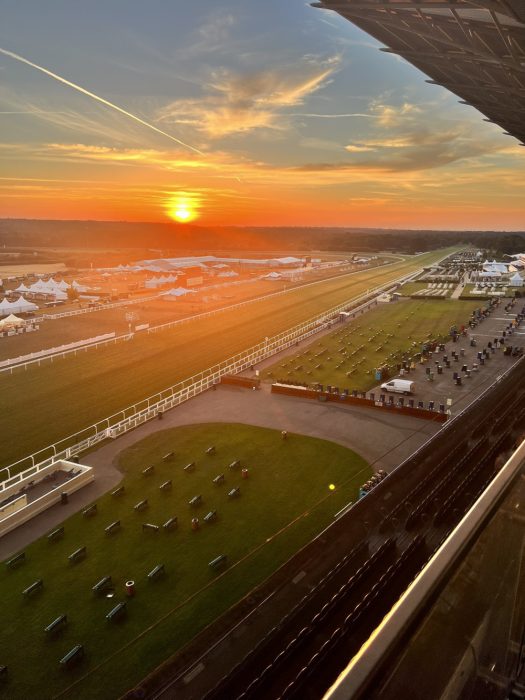 It was hot, very hot at the Ascot races not long ago (30+ degrees Celsius). The horses were racing as ...
Read More 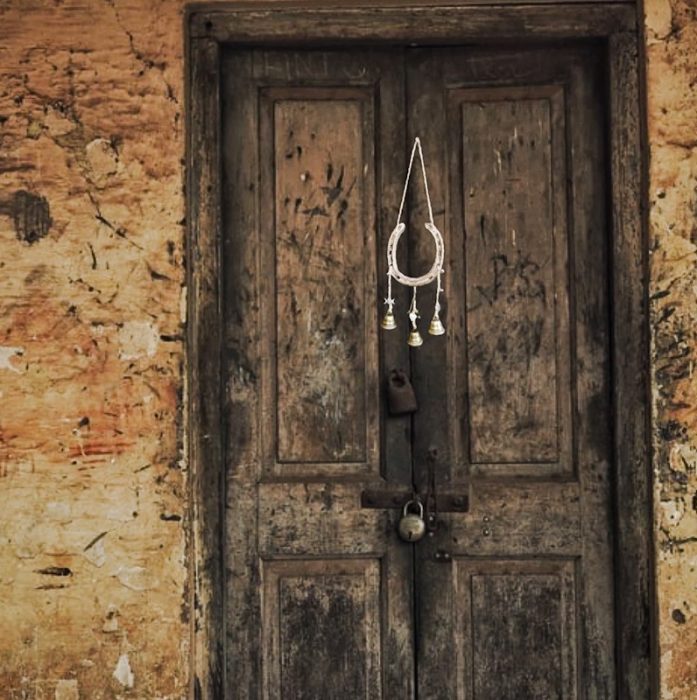 15 facts about the lucky horseshoe

Here are 15 facts about the humble yet lucky horseshoe. There are many strands to the story which I have ...
Read More 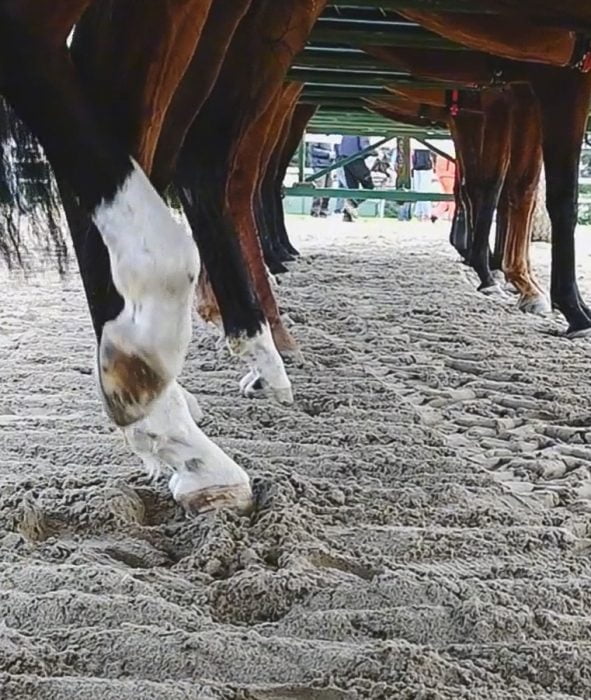 What motivates a horse to run in a race? It's unnatural for a racing horse to race. That sounds peculiar ...
Read More 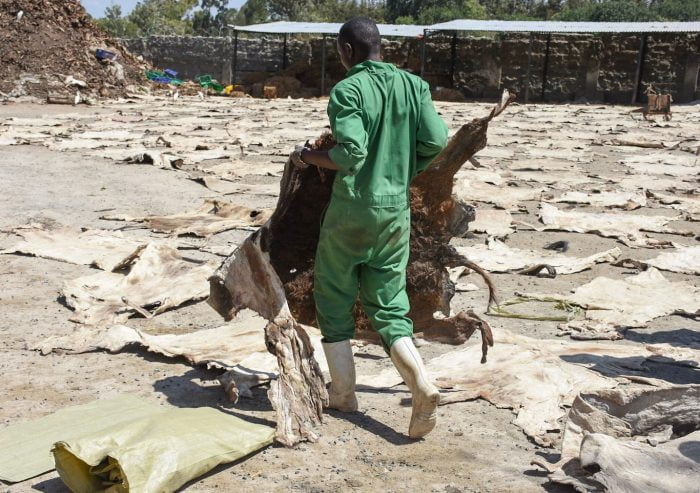 NEWS AND COMMENT: I'm afraid to say that the Chinese are again complicit in animal cruelty and the abuse of ...
Read More 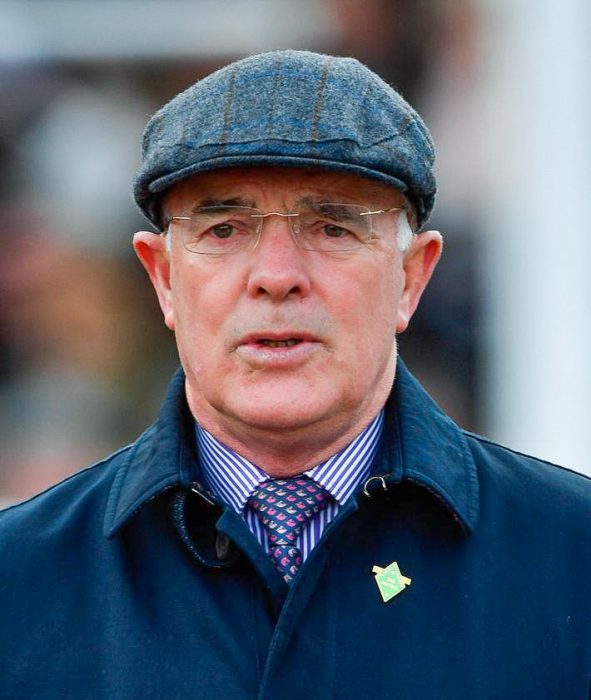 NEWS AND COMMMENT, IRELAND: There is an interesting video on Twitter of a horse race at Punchestown on Saturday last ...
Read More 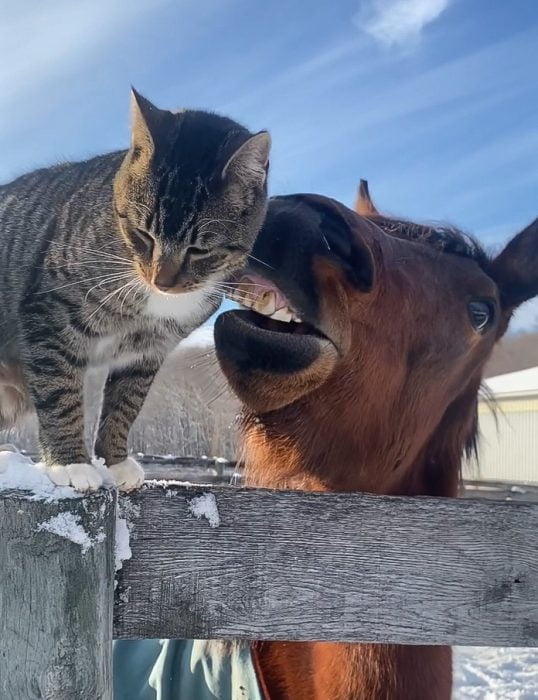 Cat and horse nuzzle and snuggle each other

A classic cat/horse relationship of which there are many. Cats and horses go together despite the huge barrier of size-difference ...
Read More 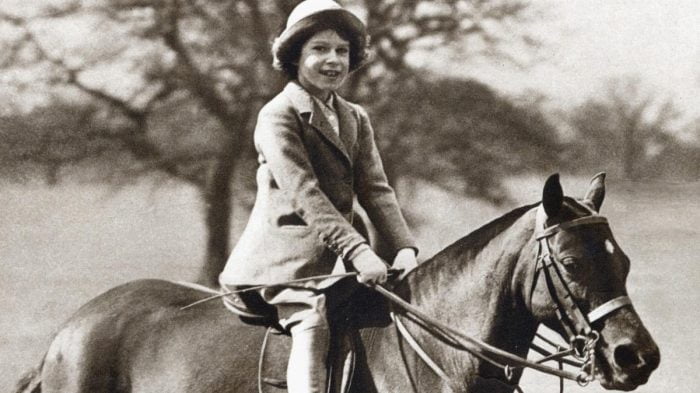 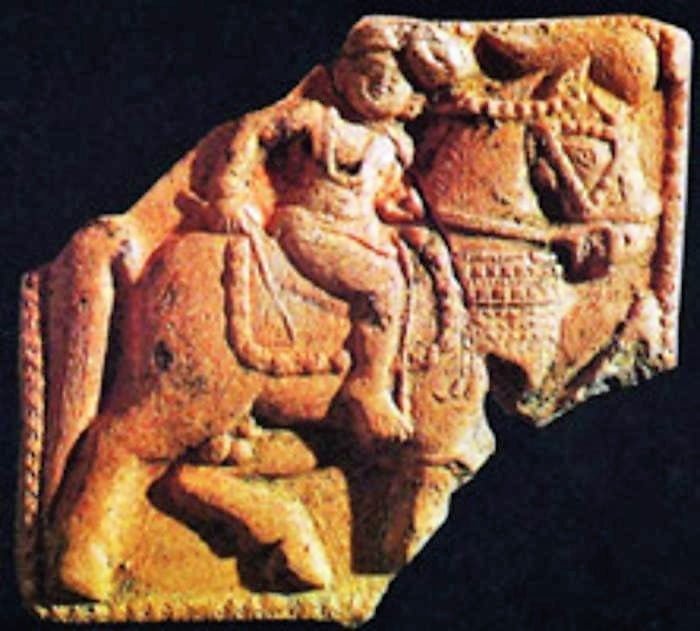 When were stirrups first used to ride horses?

I am going to rely on Dr. Desmond Morris, my favourite source of information with respect to the relationship between ...
Read More 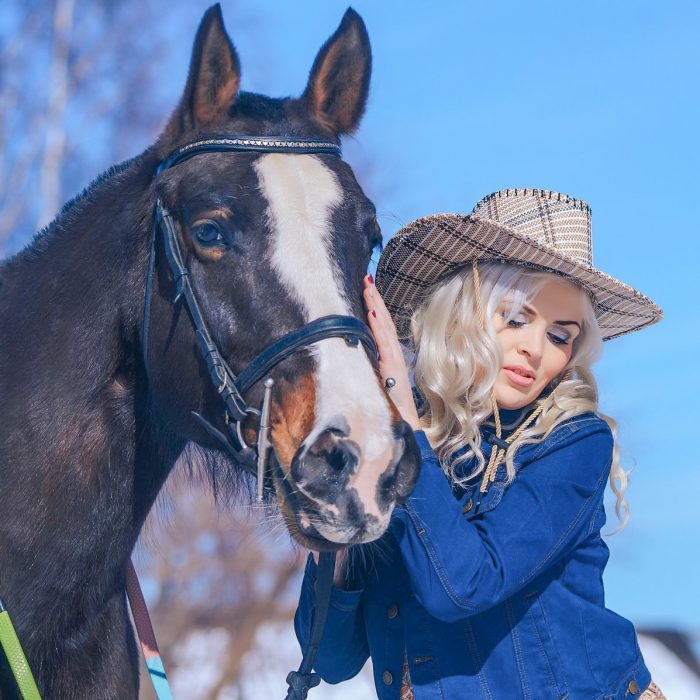 Why are horses so obedient? It’s in their temperament.

Horses are obedient because they have a strong willingness to cooperate with their human companions. There will cooperate as best ...
Read More 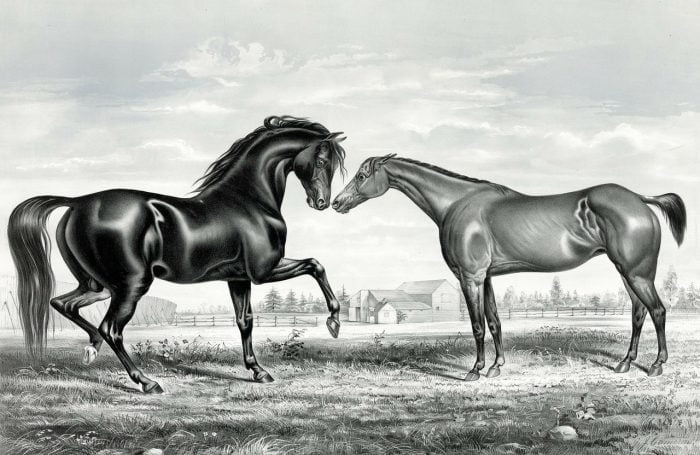 Can horses be racist?

The question sounds extraordinary, even ridiculous. However, a study concluded that free-living stallions in the USA preferred mares of a ...
Read More 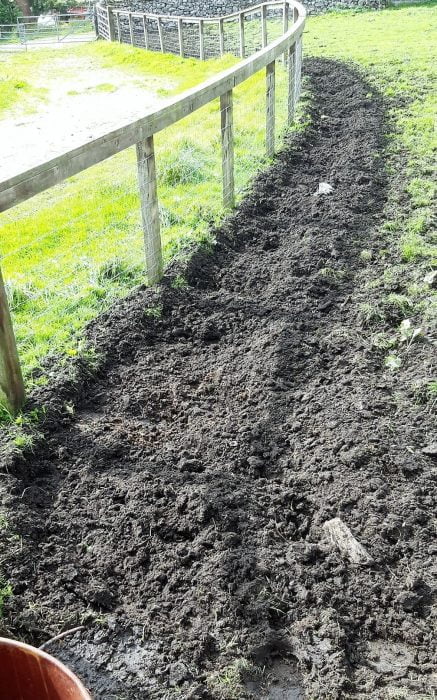 Why do horses “walk the fence”?

Horses walk the fence because they've been allowed out into a new paddock with which they are unfamiliar. Their first ...
Read More 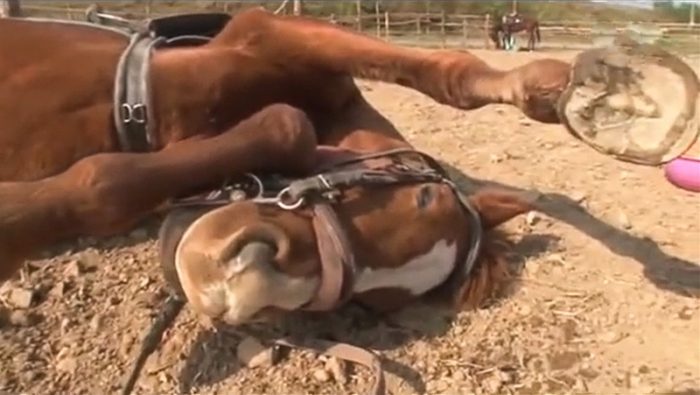 Horse does not want to be ridden and pretends to be dead. Why?

This TikTok video begs the question as to whether horses like being ridden. It seems to me that the average ...
Read More 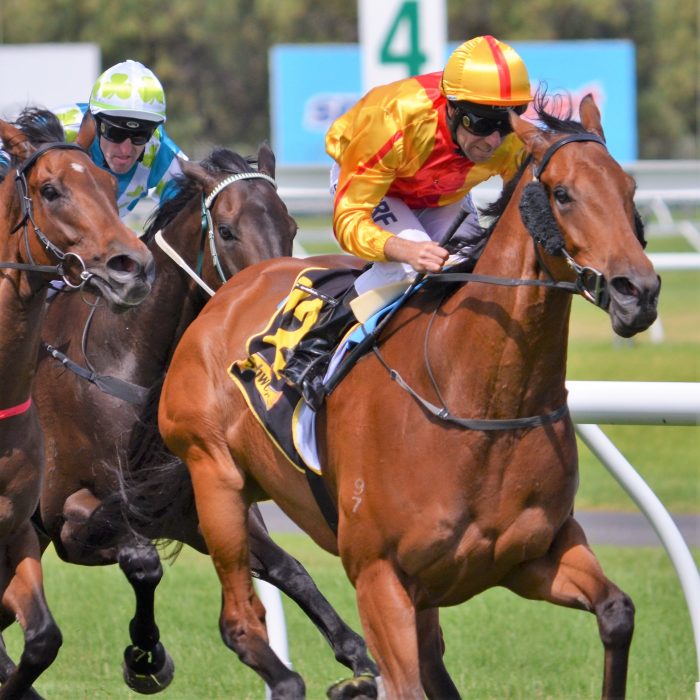 Why do we call professional riders jockeys?

The infographic below shows you how the word "jockey" evolved. It's quite a neat evolution and I thank Dr. Desmond ...
Read More 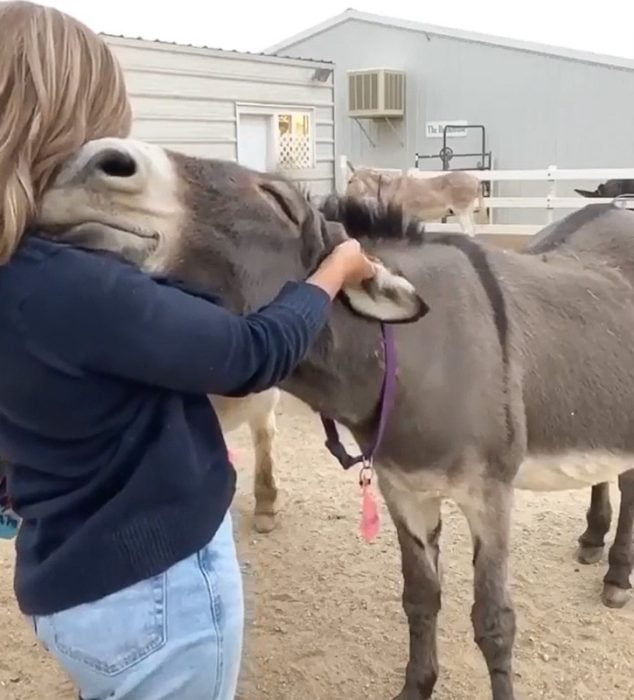 Yes, according to 6 sources. One excellent source says that donkeys like their ears to be rubbed provided (1) they ...
Read More
Powered by

Britain's pet owners are using more and more cannabis to treat their companion animal's ailments including for arthritis and anxiety ...
Read More

Well, here is a really nice photograph because we have the juxtaposition of this Chinese crested rescue pup who has ...
Read More

Two unrelated female dogs (bitches) nurse each other's puppies. I cannot find anything on the Internet which tells me that ...
Read More

Fleeting love and friendship between passing boy and dog on street

It is hard to know why this video was made. Somebody is behind the camera. Who is that person? I ...
Read More

The dog is the non-human species for which the largest number of genetic disorders is known and as at 2002 ...
Read More

A prominent, major British law firm, Slaughter and May, will allow their lawyers to bring their dogs to the office ...
Read More

Completely mad but massively impressive stunt by man and his dog

The antics of this super-fit man and his dog are made for social media video. This site is about the ...
Read More

This is a dog escape to match the best cat escapes. This was smart thinking and brave acting. Of course, ...
Read More

This cute German Shepherd puppy has strange ears. They have been pushed together on the top of his head. It ...
Read More

Mother of two, Ivana, had lost her purse. It had vanished and she was at a loss as to who ...
Read More

Why do some dogs howl when their owner howls?

The video on this page shows the behaviour that I describe in the title very well. It takes place in ...
Read More

Is it cruel to stop your dog sleeping on your bed with you?

The question opens up a can of worms it seems to me. Pet dogs often want to sleep with their ...
Read More

Amazing or what? It seems extraordinary. It is hardly believable but it appears to be entirely genuine. Training comes to ...
Read More

Since the Uvalde school shooting in which nineteen children and two teachers were killed by a single shooter with a ...
Read More

They are called 'teef chomps' - biting thin air instinctively. However, you slice it or dice it Otis is very ...
Read More

Dubai has a café that serves dogs only

It is called the first café in Dubai to serve food, coffee and cake to dogs only which implies that ...
Read More

Dog goes above and beyond to help injured canine friend

NEWS AND COMMENT-DAYTON, TEXAS: Dayton is a one-hour drive from Houston. Samantha Zimmer is a dog rescuer living in Houston ...
Read More

Post-pandemic dog prices have fallen in the UK

According to a study by the University of Toronto, children who grow up with pet dogs are less likely to ...
Read More