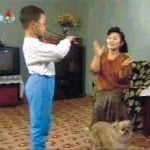 There is a sinister story in the newspapers today about the North Korean dictator Kim Jong-un declaring in July that pet ownership is a “tainted trend of bourgeois ideology”. It is reported on a Asian newspaper website that North Korea has launched a clampdown on dog ownership. It appears that dog ownership is typical of the Pyongyang elite.

Kim Jong-un’s policy against pet dogs is targeted at capitalist “decadence” but is believed that the clampdown on pet dogs is about harvesting dogs as a food source. Some of them are put down but others are sent to state run zoos or sold to dog meat restaurants according to South Korean’s The CHOSUNILBO.

A UN report stated that 60 percent of North Korea’s 25.5 million citizens faced “widespread food shortages”. The sanctions against the country are certainly taking effect. They are due to Kim Jong-un’s missile testing.

Putting aside the international sanctions, Kim Jong-un’s government has consistently failed to manage the country’s food production satisfactorily to the point where the citizens of the country are adequately fed. I can remember many years ago seeing an attractive woman in a field eating grass because she was starving. She looked utterly dejected and measurable. It appears that the issue of starvation is not uncommon in this secretive country.

To return to the pet dog problem in the country. The authorities have apparently identified households where there are pet dogs and they are forcing the owners to give them up or confiscating and killing them.

Pet owners who have suffered this indignity, are cursing Kim Jong-un behind his back but they can’t do anything about it. Reportedly, animal rights are even worse than human rights in N. Korea and human rights are not high on the priority of Kim Jong-un’s objectives.

There had been a relaxing of pet ownership after North Korea hosted the World Festival of Youth and Students in 1989. Not long after apparently the Pyongyang elite flaunted expensive dogs as status symbols.

Ordinary people raise pigs and livestock on their porches, but high-ranking officials and the wealthy own pet dogs, which stoked some resentment.

A defector said clampdowns like this are not enforced well because the enforcers lack enthusiasm but this time appears to be different and the clampdown is more severe.