NEWS AND COMMENT: This is a confusing and fluid topic. It is not a good state of affairs. Personally, it is astonishing to me, and I’m sure it is equally astonishing to many other people, that some Americans are self-administering with a horse dewormer called ivermectin in order to protect themselves against Covid and as a cure. They got the idea from Australian research last year which showed that it was effective in killing the Covid virus in laboratory tests. This led to further research on people but the results are yet to be published (see video below).

In the meantime, this misguided (I’d say) desire to avoid vaccinations but rather take a powerful horse dewormer is causing serious illness. For example, the authorities in Oregon, USA said that dozens of people had contacted the state’s poison center after taking ivermectin, with five in hospital including two in intensive care units.

This anti-parasite treatment has been removed from shelves in some stores and limits had been imposed on online sales after hospitals reported cases of serious side effects on people taking this drug. The researchers say that ivermectin should not be taken by people. Unfortunately, in the US it has been touted on some fringe website and by some personalities as being a treatment. And the video implies that ivermectin is a good treatment for COVID. Is this correct? Is it about the size of the dose or the drug itself that is harming people as described above? People are believing the guy in the video. Is he responsible for the harm to these people?

Note: This is a video from another website. Sometimes they are deleted at source (distinctly possible in this instance) which stops them working on this site. If that has happened, I apologise but I have no control over it.

The USDA tweeted that people are not horses and they should stop taking the drug!

As a side-effect of this, people in the business of equine health are having difficulty in getting their hands on ivermectin because too many people are buying up the product. Also, retailers are taking steps to protect the public by making it harder to buy the drug. This presumably slows supply to the equine market.

In Las Vegas, the V&V Tack and Feed shop has a sign which says that customers who want to buy ivermectin “must show a pic of you and your horse” to make sure that customers are not buying it for themselves! A shop assistant at the retailer, Christie, said that she had turned away eight people asking for it on Sunday last because she had decided that there were not genuine customers.

She mentioned that “It’s for horses up to 1500 pounds. So, you choose to give it to your child, as I had a customer do, a couple of months ago. He is now in kidney failure.”

Pray God that people switch on their brains and switch off their desire to buy a horse dewormer to treat Covid! I have had both AZ Covid jabs and feel fine and genuinely protected. The risk to serious ill-health from ivermectin is far, far higher than it is for a vaccine. It is illogical and dangerous to take ivermectin instead of an approved vaccine such as the AZ.

SOME MORE ON COVID 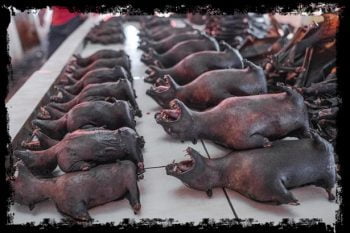 China does not have an exclusive right over these disgusting live animal markets where zoonotic diseases can transmit from animals ...
Read More

The flat-faced dog breeds such as pugs and bulldogs are known to have health issues and The Telegraph reports that ...
Read More

6% rise in demand for pest control because of coronavirus pandemic

The Times newspaper tells us that there has been a 6% rise in demand for pest control because of the ...
Read More

Why are Dachshunds so popular?

Dachshunds are particularly popular at the moment, during coronavirus lockdowns. But they've always been popular. The second reason is layered ...
Read More

Dogs desperate for haircuts after the long coronavirus lockdown

This is Poppy a goldendoodle before and after her haircut. Quite a transformation I think you will agree. In fact ...
Read More

In an interesting twist, the US Geological Survey has advised American researchers to wear personal protective equipment and take Covid-19 ...
Read More

Leaving your dog alone while you work is problematic. The pandemic is about to create a fresh problem with respect ...
Read More

NEWS AND COMMENT: This is an update on the viral news about the surge in dog thefts in the UK ...
Read More
Tags:coronaviruscovid-19drugshuman behaviornews
previousSquirrel evades pine marten with stamina and skill
nextWoman throws injured puppy into the ocean

The Times reports today (Oct 11, 2021) that undersea electricity cables cause brown crab to sit still. It seems that ...
Read More

After seven years of thinking and research, Zhi-Ming Yuan, has figured out why ducklings swim in a neat, nicely spaced ...
Read More

Some of the Reddit comments: In soviet Russia canned fish eats you! Looks like that fish came from Chernobyl. SOME ...
Read More

36 pence for a dead baby octopus, one of the most amazing creatures to ever swim the seas

The words in the title are those of Justin Webb, 41, on Twitter. He is a charity worker and vegan ...
Read More

The teeth are remarkably like a human's. This fish was apparently spotted by some beachgoers in the Outer Banks in ...
Read More

Blue lobsters are 1 in 2 million

People ask whether blue lobsters are poisonous, real or rare and even whether they are expensive. Lobsters are blue because ...
Read More

Trout can become hooked on drugs

The Times reports that fish can become addicted to drugs like people. Dr. Pavel Horky, from Prague, in the Journal ...
Read More

I recently wrote about male dolphins who remember other males who did not come to their aid when they needed ...
Read More